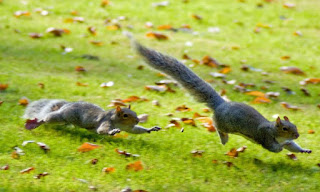 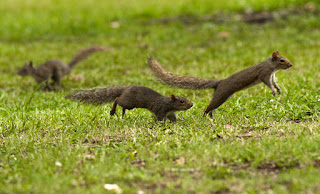 The other day I was working in my studio and through the window, a blur of brown furry movement caught my attention. It was the wrong shape / size / color to be either of my dogs, so I went over closer to the window so I could see what was up.  Low and behold, what can only be described as a squirrel scrum, involving at least 5 different tails (too much movement to discern further details, but it looked like an old kid’s Davy Cockett racoonskin hat was having a seizure) was bouncing around in a frenzy on my back yard patio. I thought it was maybe either a bunch of squirrels who were hallucinating from having ingested too many fermented half rotten peaches or else a rabid pile of tiny whirling dervishes. Making their little squeaking chattering noises the whole time.

I went outside to see more closely what was going down - equipped with a broom and a can of wasp spray (all I had on hand) to break up the fight. I was praying I wouldn’t have to actually use either of these items, but the squirrel scrum was too busy to even notice or care that I was there, beating them w the broom and hollering for them to leave. Those rats with tails took no notice of my 70 lb boxer dog, either, and only dispersed when I turned the hose on them.

Turns out the hubs and I, in one of our ever increasing moments of senility, had left the brand new giant 20 lb bag of bird food just sitting out on the patio overnight, after we had refilled the bird feeder late the day before. All the squirrels in a 6 house radius had feeding on the contents of that bag ever since - had gone completely through the entire bag, eating all the sunflower seeds only and leaving the millet and other tinier seeds behind with contempt, mixed with a few squirrel turds. My patio was strewn with 5 lbs of empty sunflower seed shells as the sated beasts waddled off to digest their feast. All the yard birds perched in a semi-circle on the surrounding trees, chirping at me to “hurry up and feed them and it wouldn’t kill you to clean out that birdbath, either while you’re at it.” They do this every day as it is, but the squirrels’ scrum had really trashed the birds’ dining area- plants were knocked over, the birdbath was full of sunflower shells, with seeds strewn everywhere.

I cursed at those @#$% squirrels as I cleaned up after them, “Just more men around here for me to pick up after......I bet they don’t put the toilet seat down at home, either.” For I knew they were all males, teenagers, by the look of them. Good thing I don’t have a doorbell, or they’d ding-dong-ditch my house, too. Later in the week, I saw the same furry ball of teenage hoodlum squirrels bouncing through my rose beds, and again attacked them with the hose. They just laughed and ran away......but I know they’ll be back.
Posted by Girl From Texas