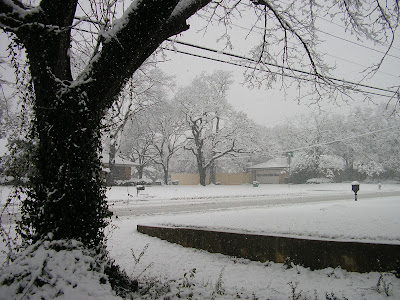 "I have Often Walked Down this Street Before, But the Snow was Never on my Feet Before"

We don't often get snow in north central Texas, (generally every other year or so we get a dusting) so we get pretty excited around here when we do. People around these parts still reminisce about the "great storm of '08" which happened in March, of all things. (Started snowing mid-morning; by 1 am they closed school. My normal 5 min commute home took 45 minutes.) This being an El Nino year, we've had 3 - or is it 4?- snow storms so far this year alone, and winter is not over yet. The one we had on Feb 11 broke all records for the greatest amount of snow to fall in a 24 hour period in this area, since records started being kept. The official record for this latest event is 12" for the DFW area, and Denton was no exception. School was cancelled for a record two days over this one; I can't remember that ever happening in my lifetime.
*
Of course, no one in north central Texas has ice scrapers for cars, snow shovels or blowers, much less snow boots or heavy winter clothes, gloves or hats. They don't even sell that stuff in stores. Hubster and I have a half-broken snow shovel we brought back with us from Virginia, and all the clothes we wore when we lived there. Our children, however, refuse to wear coats so I stopped buying them several years back. Fortunately, they now, as teenagers, think they are 2 kule to actually go out and play in the stuff any more, and would rather sit around with their video game systems, anyways.
Posted by Girl From Texas No comments: