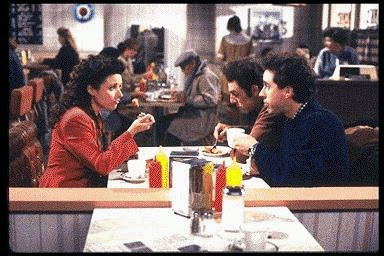 Isn't this more fun than "Friends" ? For some reason, that show just never really did it for me. Maybe those characters are just a tad too GenX - while the Seinfeld characters are all Baby Boomers, as am I. I just couldn't relate to the "Friends" type of angst
I have many secret guilty pleasures which are sometimes embarrassing to admit ...one of them is an addiction to "Seinfeld." I don't know why this show is so funny, so applicable, so necessary to my life.....it just is. As a small child, my mother raised me to watch "I Love Lucy" reruns on a daily basis, (mom loved watching them while she cooked dinner) and I think, for a while, it shaped my life. I still treasure the "Hollywood" episodes of that series, with cameos from Harpo, John Wayne, William Holden, et al. Can still recite many lines of dialog verbatim, and perhaps modeled some of my own personal life and relationship expectations on episodes where Lucy and Ethel made bread, Lucy's commercial for "Vitameetavegemin", when she stole footprints from Grauman's Chinese Theater, or tried to sneak in to the show at Ricky's nightclub. Life got too busy for me to watch the show for a few years, and when I finally tuned back in, sadly, I found that my attitude toward "Lucy" had changed. In between, the women's movement came along, I went off to college, became a rad fem, grew up, got a job. Lucy's relationship with Ricky now felt demeaning, and Lucy's lack of personal empowerment was humiliating to endure. I just couldn't watch it anymore.
*
Shortly thereafter, I met and fell in love with with the 80's-90's show "Seinfeld". I don't remember when it first happened - maybe when I lived in New York, maybe some other time. The setting of the show is not what has held my attention all these years, rather, it is the comedy shticks and the relationships between the characters. Just like "Lucy", there are classic old vaudeville moments : "Soup Nazi", "The Bottle Deposit", "The Second Spitter". Kramer's (Michael Richards) physical comedy and offbeat ideas ( the "bro", a manssiere) never ceases to make me laugh, and the fact that "short stocky bald man" George (Jason Alexander) has a series of beautiful girlfriends who bore him, and whom he is always trying to get rid of, along with his futile attempts to avoid working at any real job - are great running gags. (Hubster says he likes Marissa Tomei, just as George does.) It doesn't hurt that one of the greatest comedic actors of a generation, Jerry Stiller, is a semi-regular on this show as George's father, Frank Costanza. (I like his son, Ben, in some of the movies he has made, but not all. Love "Dodgeball", hate "Tropic Thunder". It's just not funny to me.) Frank's stint as a chef, in "The Fatigues" is one of the greatest episodes of the series. Wayne Knight, as the annoying neighbor "Newman," is also a national treasure and needs to be given a lot more work.(I also loved him in the Branaugh-Thompson mystery romance vehicle, "Dead Again.") 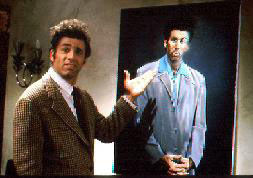 I've been watching "Seinfeld" for years. Since I moved back to Texas, over a decade ago, it has aired regularly each night at 6:30 on a local cable station that typically shows reruns. At first, I was the only family member addicted to the nightly adventures of Jerry, George, Elaine, and Kramer - but soon, my entire family became pulled into the episodes. It became a daily ritual that I would cook dinner while watching the news, and we would eat dinner while watching "Seinfeld". What this says about my family, I fear to ask - perhaps my children are doomed to a life of juvenile delinquency due to the fact that we eat while watching tv, instead of discussing the day's travails with wise fatherly advice, like those smarmy kids in "Father Knows Best". 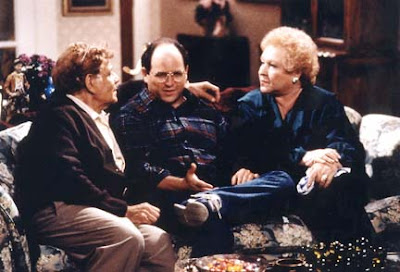 Does this remind you of anyone ? George and Estelle Costanza (Jerry Stiller and Estelle Harris) make hubster so uncomfortable when they appear, he has to leave the room. It seems they remind him of someone he knows or, possibly, is related to. (The other great tv mom who does that to him is Holland Taylor, who plays Charlie and Alan Harper's mother from "Two and a Half Men". Her voice, her clothing, her manner - excruciatingly familiar. ) However, George's relationship with his parents is stilted, frozen, and painful. He never learns how to deal with them and each encounter is nails-on-the-blackboard annoying. (Charlie, on "2 and 1/2 Men" in contrast, manages to make fun of his mother at least, although she still gets the better of him most of the time.) Watching the Costanza family dynamic ( my fave is when Estelle is in the hospital, George is visiting, and watches her roommate get a sponge bath.) is a great lesson in how not to be......and catch phrases such as "master of your domain" have become a permanent part of my family lingo. 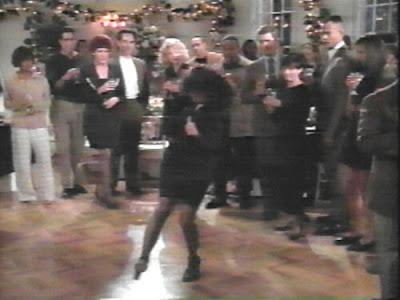 I think, perhaps not too secretly, that I identify too much with Elaine. (This was such a great role for Julia Luis-Dreyfus, showing the full range of her talent; she also had a funny small part as the evil yuppie neighbor in "National Lampoon's Christmas Vacation". I absolutely hate her new show, "The Adventures of Old Christine."A recent spate of tv shows, where divorced couples are chummy and hang out together after the divorce leaves me pondering : If they are such good buddies, then why did they get divorced in the first place? Who lives like that?) I used to look like Elaine, just a bit, and fancied myself to be the same sort of sassy, confident, career woman. I do have guy friends I used to date, but later became just friends with, like Jerry and Elaine. I would have loved to have had a career writing gibberish for The J.Peterman Catalog, (once bought a dress from them back in the '80's) and traveling with my boss to Thailand, England, Africa, and places in-between.
*
A few years back, hubster and I found ourselves country and western dancing in a honky-tonk in a tiny little town in far west Texas. The local denizens there thought our dancing style was, to say the least, peculiar. Neither hubster nor I have hung out in bars, discotheques, or danced much (other than at weddings) since our college days, and it is probably safe to say our dancing "style" froze somewhere around 1983 when we were at parties listening to The Judy's, The Clash, Gary Neuman, the Thompson Twins, Madonna, the Eurythmics, and the Ramones. So I secretly worry that I , too, dance like an idiot these days - just like Elaine - and that people are laughing at me behind my back.
*
With great anxiety I discovered one day last fall that suddenly and without warning, "Seinfeld" was taken off the air at my preferred 6:30 time slot. Sure, local stations were running back to back episodes at midnight...what's up with that ? What good does that do anyone who comes home from a long stressful day at work, needing a little laugh ? Sadly, I searched the dial, looking for something similar in tone to take it's place. There was no "Simpsons", no "Three Stooges," nothing. I was bereft. The days dragged on..... I still cooked dinner each night while watching the daily disasters on the evening news, but with nothing funny on tv, my attempts to get the various members of my family back to the dinner table were futile. We dragged on in this dispirited manner for months, me sitting alone at the kitchen table, kids wolfing their food down and going upstairs to play video games, hubster pacing around the house. In the words of Jackie Childs, we were "disgusting, salacious, outrageous !"
*
You can imagine my pleasant surprise the other night when I turned on the tv, was scanning the guide, and suddenly, in it's old 6:30 time slot - was "Seinfeld". Could it be that other people also missed watching this show while eating dinner, and hounded the station to bring it back? As perverse as it sounds, this show about nothing brings my family together. Not that there is anything wrong with that.
Posted by Girl From Texas No comments: