Looking Forward to the Holidays - NOT! 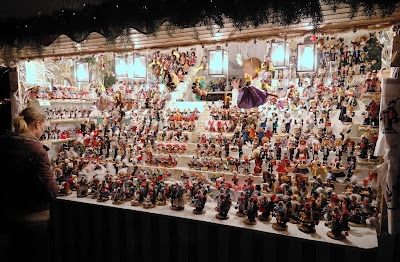 There are many tales in the naked city...this is one of them. Folks have heard me talk about the often strained relationship between my mil and myself.... In the early years of my marriage to hubster, my mil went to several of the German Christmas markets (as she often does- in fact, she is preparing to go again this year) where she likes to buy charming hand-crafted German tree ornaments and other bric-abrac to give as Christmas gifts. The first time she did this, hubster got a little wood carving of a mountain man smoking a pipe. (Surely not an allusion to his hobbies in college...)The boys got soldiers or something. I was given a prune doll that was dressed as a devil. No lie : it had two horns on its head, a long, forked tongue, and a skinny tail with a triangle on the end.

This kind of gift-giving has been going on for years. One Christmas, mil gave me a tiny zip-locked bag of hay. (A friend of mine, who is Polish, says this is a reference to the manger or something.) And nothing else. Hubster and boys continued to accrue Hummels and wood-carvings, little statues and toys, doo-dads to put on the mantle place. Mil always askes to see these items when she comes to visit, so I haven't had the courage to throw them out or pack them away yet.

But the coup-de-grace ? Last year mil gave me, as my sole gift, a book (clearly a "free-bee" she got from renewing a magazine subscription) entitled Clear Out Your Clutter. Now who is it, just exactly, who gives me all the clutter?
Posted by Girl From Texas No comments: