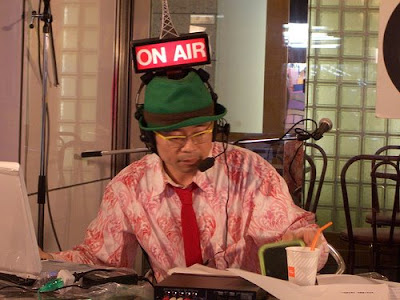 Pretend for a moment that this is not a blog posting, but a late night radio show. The kind you used to listen to as a kid, where the dj spoke in a sultry smokey voice and played the long version of songs like "Freebird" by Lyndyrd Skynyrd, or "Blackwater" by the Dooby Brothers. When I was 13 or 14 years old, too young to go out but too old to be content with merely going to sleep, I used to talk for hours on the phone to my best gf Calan or this boy I had a crush on, known in this blog as Vincent the Spellchecker. (Kind of like Luke Skywalker.....in many ways.) Back in the olden days, as I often tell my children, we didn't have cell phones or cordless phones that let us talk to our friends wherever we were . No indeedy, we had the rectangular wall phone, most frequently mounted in the kitchen, and if we were lucky, our parents had already grown annoyed with the fact that we were always on it, and purchased an extra long handset cord, so we could get out of the kitchen , go around the corner into the laundry room or the guest bathroom, tethered to this earth by a 20 ft length of spiral-twisted plastic coated wiring,often in Harvest Gold or Avocado Green. There, perched on the washing machine or sitting on the floor of the bathroom, we would talk all night long, often while listening to the local "Top 40" radio stations. Conversations often went something like this :
*
(Both friends listening to the same radio station in their separate homes)
*
"I like this song...mmmm-hmmm-dadaaaaadadaaaa. So what did he say ?"
*
"Nothing, he just looked at me. I was asking YOU if you thought it was a significant look, or just a random look.You know, like you've been doing your homework and to take a mental break, you just look up, and I happened to be in your line of sight , kind of look."
*
"But I thought you said you sat BEHIND him in English class."
*
In the background : "Nights in white satin, Never reaching the end, Letters I've written, Never meaning to send. Beauty I'd always missed, With these eyes before, Just what the truth is, I can't say anymore. 'Cause I love you,Yes, I love you,Oh, how, I love you. "
*
In those misty hours between midnight and dawn, many important topics were discussed while the music rolled on. Interrupting the late night dj's patter were occasional phone calls from listeners with song requests and dedications. This premise , used to terrorize a character in the film "Play Misty for Me", is not really seen anymore - it seems that it is cheaper to have pre-recorded play lists set up and ready to roll, all promoting the album or song the music company wants to sell, not what members of the audience actually want to hear.
*
In the interest of remembering and preserving that moment, I offer up : Song Dedications. I have long thought of various people from my life in terms of which song I would dedicate to him/her on just such a late night radio show, and I include them here, just to amuse myself . Sending it out into the blog-o-sphere, just like those radio waves they say from the earliest days of broadcasting which are somewhere near Jupiter about now.
*
To Steve I dedicate : "Spiders and Snakes" by Jim Stafford.
*
To Michael I dedicate : "Whiskey River", because he used to take me to a bar by the same name. I like the Willie Nelson version best.
*
My parents always make me think of John Denver songs and all those happy childhood summers spent in Colorado. "Rocky Mountain High", "Country Roads" and "Mother Nature's Son" .
*
Calan gets anything by Elton John, b/c she used to love him so
*
Spuddie and her brothers get "Never Marry a Girl From Monrobia" and all that other strange wonderful crazy African pop music they brought to the USA with them from Liberia in 1972
*
Bill gets several songs, many of them from opera, such as the main theme from "Tristan and Isolde" . I also associate him with movie themes, such as the music to "Breakfast at Tiffany's" and most songs from "Mary Poppins" or "Chitty Chitty Bang Bang". He has long maintained that his song for me is "Tainted Love". As far as pop music goes, I often think of "House of the Rising Sun" for him, mostly b/c I associate him strongly with New Orleans
*
To Judy I dedicate : "Time Warp" from Rocky Horror Picture Show b/c we used to dance it together , in hallways, late at night.
*
Bart gets pretty much anything by Led Zepplin.
*
Nathan gets "Heart of Glass" by Blondie
*
To Tom I dedicate "Science Fiction, Double Feature" from the Rocky Horror Picture Show, b/c he took me to see that movie dozens of times.
*
To Robert I dedicate "Don't It Make My Brown Eyes Blue" by Crystal Gale, also anything by The Judys
*
Hal gets all that weird new wave stuff, like Gary Numan and Iggy Pop
*
Pretty much anything by the Rolling Stones makes me think of Ronald, esp the "Some Girls" album.
*
To Susan B I dedicate : "Swingin'" by John Anderson, mostly b/c she loved that song and sang it constantly. (Personally, it drove me nuts.)
*
CaCo gets "Material Girl" by Madonna
*
To Chip I dedicate : "Afternoon Delight" by the Starland Vocal Band.
*
Rodney gets anything by the Thompson Twins, b/c he used to be their Number One Fan
*
To Greg I dedicate : "Good-bye Earl" by the Dixie Chicks. I actually plan to drive 'round and 'round his funeral ceremony, if I outlive him, blasting this one from my car stereo as loud as I can.
*
To Rick I dedicate :"I Can Help" written by Billy Swann and sung by Clyde McPhatter; also anything written by Springsteen, b/c he is the one who introduced me to The Boss. He likes "Tramps Like Us" for our theme song.

Do you have special songs that you would like to dedicate ? Email me on facebook, and I will add them to this site !
Posted by Girl From Texas No comments: 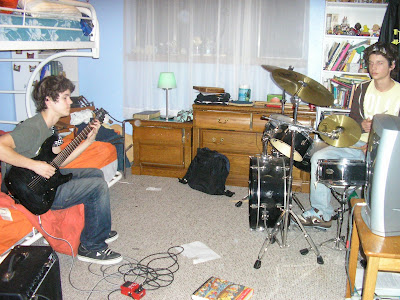 "Rockband" the video game may be all the rage with the kids these days, but a certain element of young man ( and girl !) still dreams of becoming an actual player in a rock 'n roll band. It is not enough to own simulated instruments in a video game, no, real ( and expensive) instruments must be purchased, too. Countless hours are spent in the family garage practicing songs , writing new ones, hanging with friends, getting the act down just right. It is one of the joys of parenthood that weekends at my house are often spent listening to the deafening screech of feedback when the electric guitars get plugged in and ramped up. The constant drumming I am used to. Fortunately, this is a home that was built for having teenagers, and I can almost get far enough away in the master suite from the kids' rooms that I can barely hear the "music" as I sleep.