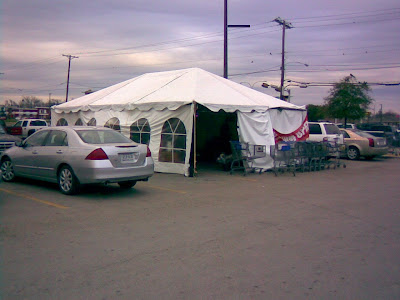 Every year around this time, GFT cannot help but chuckle to herself as "the man tent" appears at the local Kroger grocery store parking lot. Millions of similar structures suddenly arise all across America. You could say they suddenly pop up, pressing against the seams of society, as the proximity to that great romantic holiday, Valentine' s Day, approaches. The man tent, you see, is erected, (please excuse me the occasional pun, the possibilities here are just too good to let pass ) as it were, for all those hapless chaps who know they need to purchase a Valentine's Day gift for their beloved, but just can't bring themselves to step inside an actual store and purchase one. GFT knows that shopping is something most men abhor, and her own hubster, true to fashion, would rather have his nails pulled out than visit the local mall. Hence the growth of the man tent, a brilliant marketing ploy.

The man tent was the invention of a brilliant marketing manager somewhere along the way, a man no doubt, who observed that it is obviously too difficult a task for men to actually park the car and go into a store to buy the usual requisite flowers, candy, cards, cheesy stuffed animals, etc. By coming up with the idea of placing a large tent in the parking lot, men could be assured that their maniless was not challenged in any way, as they go about their twice or thrice yearly(Christmas ? birthdays ? ) ritual acts of shopping for the woman in their lives. Furthermore, by driving up to the tent, leaving the car idling with the door ajar and the keys in the ignition, men get the thrill of not having to deal with the lines of random other customers slowing a man down, clogging up the register lanes with their silly purchases of milk,cigarettes and groceries. The men on a mission for VD gifts must complete his mission with a minimum of fuss and time. To spend any longer than absolutely necessary would drastically increase the embarrassment quotient of said men, and that we just can't have.

It has taken the hubster only 15 years to learn that it is far easier to please the ole' ball and chain on VD than to spite her. The good will incurred by Doing The Right Thing lasts for months......the fury incurred by not doing the right thing, lasts......FOREVER. GFT has only a few simple requirements, all quickly and easily satisfied by the clever man with a credit card : dinner out at a nice restaurant, flowers, candy ( drugstore brands won't suffice) and a gift. A nice gift. Really, was that so hard ? 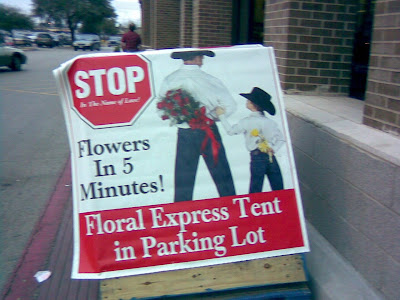 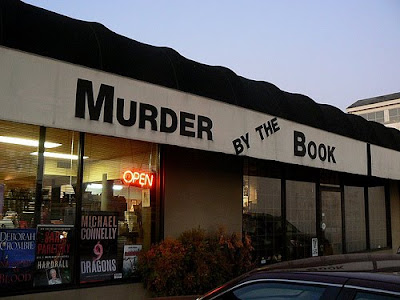 If I'm not careful here, this blog is going to turn into some less funnier version of "Stuff White People Like" ( if you don't know what I'm talking about, just google that and you will soon know what I mean) but since many of my posts are devoted to books and reading, I might as well get this one out of the way. OF COURSE I love bookstores of all kinds, and am not one of these Luddites who complain about the Internet and kindle and all that .......(oh, wait, yes I did!) Without amazon, I couldn't find half the really obscure stuff I look for on any given day. But it must be noted that bricks and mortar bookstores, especially independently owned ones, serve special functions that Internet shopping sites can never fulfill. I make it a point to check out everything from the mom-and-pops to the really famous ones ( such as The Strand in NYC, City Lights in San Francisco,The Bodhi Tree in West LA) everywhere I go.
*
Independent bookstores create collections with depth and breath, each famous for it's own specialties, and usually have knowledgeable staff that can guide and enlighten the book browser in ways an Internet browser never can. Do you ever wonder about those "recommendations" that pop up when you shop at amazon? I find myself having weird little conversations ( with myself, of course) about who the heck actually bought some of the stuff that is "recommended to me" or "other people who bought what you are buying also bought these" based on my purchasing patterns. Whatever algorithm is used, it rarely suggests something I would ever want. I often wonder, are there truly people who bought these ? Or is this just a totally fictional marketing strategy,based on junk they need to unload ? If so, it fails here because if you tell me someone else bought/did it, I'm the kind of person who will do the opposite. That's just the kind of gal I am.
*
So, back to topic: Two of my favorite bookstores are right here in Texas (and on the web if a real life in-person visit is impossible) .Both have helpful friendly staff who will find something for you and mail it to you, if need be.
*
Murder By the Book in Houston Tx specializes in just one area : mystery and detective (and spy, espionage, thriller, suspense, etc) fiction. The collection is vast and deep within this genre, with both modern best sellers, rare collectors editions, and vintage out of print, even international tomes. The store owners and staff are extremely knowledgeable; just visiting this store is a pleasant experience due to the wood shelving, oriental rugs, leather arm chairs, cat in the corner. Author nights with book chats and autographing sessions are a regular feature. They put out their own little newsletter, available online or by snail mail, with book reviews and news of upcoming events. It is the quintessential manifestation of every book lovers ideal bookstore experience.
*
Recycled Books in Denton, TX is a vast space filled to the brim with cast-offs from years of college students ( fed by nearby TWU and UNT) and old college professors who die and their snot-nosed grown children don't want all their books so they sell them for pennies on the dollar to RB. Those kids' losses are your gain, for the selections here are not cheezy airport kiosk best-sellers. There is incredible depth and even rare collectibles in areas professors love to buy : art and music, history, literature, cooking, travel, philosophy/religion, science, and even children's books. Prepare to spend an afternoon browsing and even while prices are great (cheap) you will find yourself spending far more than you intend, the selection is that good. 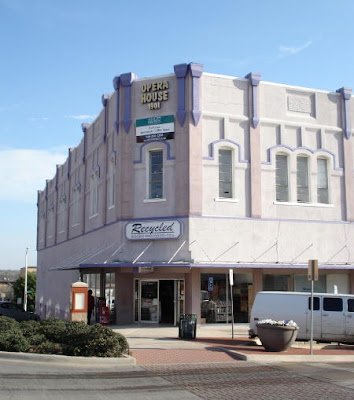