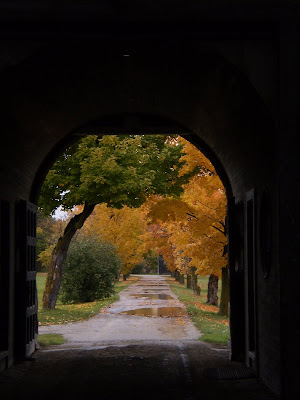 View through the barn at Sherbourne Farms of local fall scenery
It is an oft-repeated cocktail party banter on my part that many of my teacher friends, as soon as they retire, take a fall trip to Vermont to see the leaves change, mostly because they can. While school teachers do get plenty of time off at summer and Christmas, and some schools have the odd fall or spring break (here in the DFW area we get spring break but not fall break) our vacations tend to only fall at those prescribed holidays, and are often quite crowded due to the fact that this is the only time kids get out of school, and hence that's when their parents tend to travel with them. As teachers, we get lots of time off, but little flexibility as to when we can take it. Spring and fall are often the best times to travel, for various reasons - popular destinations in Europe or other spots are often at their best during these shoulder seasons, precisely because no one else is there, they are all still in school, the weather is great, the sites are less crowded, etc. At any rate, this is a very long-winded way of saying that I have always wanted to go see Vermont in the fall, and this year I finally got the chance. 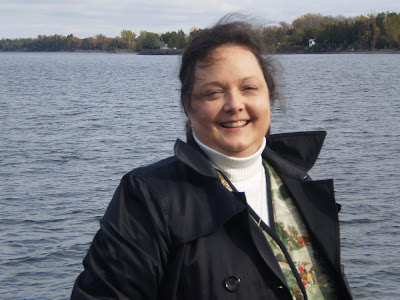 Riding a ferry across Lake Champlain
Hubster typically travels to work related conferences and events an average of 6-8 weeks of the year - just one of the perks of that fabulous college professor lifestyle. If he goes somewhere interesting to me, and it is convenient and workable ( i.e. someone can watch the kids-even more important now that they are teenagers, and likely to get into so much more trouble than ever), I often travel with him. The two of us have been to Montreal, San Francisco, New Orleans, and Colorado on these little junkets, and we have friends, an older couple who are 20 years further down the professorial highway than we are, who regularly visit Barcelona, Bombay, Iceland, London, and Phuket on similar ventures. I am looking forward to the carefree, childless golden twilight of our life......and really hoping we will be healthy and solvent enough to enjoy them.
*
As part of his duties directing the Texas Governor's School of Math and Science, hubster gets to attend the annual conference of governors schools all across America. Last year, the conference was in held in Memphis, and was hi-lited by a dinner jazz riverboat cruise that had an Elvis impersonator entertaining the crowd. Hard to beat that......This year, the conference was held in Burlington , Vt. In spite of the fact that I lived in Westchester Co, NY, in the early 1990's, I never made it up to Vt and was excited to be able to go along. While hubster sat in meetings all day, I got to toodle around the area, riding a ferry across Lake Champlain, visiting Stowe (home of famous ski resorts, Ben and Jerry's ice cream factory, lots of great scenery, some covered bridges, as well as the family ski lodge owned by the Von Trapp family, of Sound of Music fame) and shop. Evenings we spent at receptions for the members of this conference and their guests - one was the local ECHO Center , a charming little science-history museum where we had a private tour and catered dinner, and I learned all about Nessie, the Loch Ness type monster that supposedly inhabits Lake Champlain. 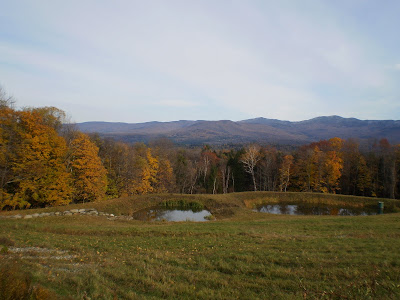 View near Stowe, Vt
Our trip was about two weeks "post peak" of the leaf viewing season, but it was still a lovely time to visit. This visit was made even more fun by the presence of several friends and co-workers, who made the dinners and day trips even more jolly. We sampled a lot of great local cuisine- all of it organic, free range, hand crafted and sustainably farmed, I might add - and toured some fun sites, such as Sherbourne Farms, which reminded me very much of Biltmore, near Asheville, N.C., where we got to take a tour given by a family member of the original inhabitants, and see how cheese is made. 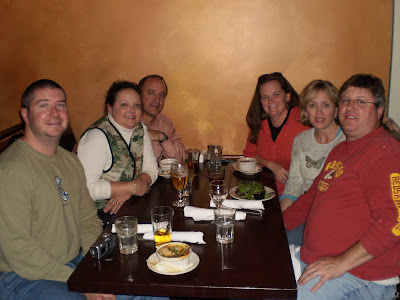 Eating out with friends at SweetWaters in Burlington, Vt

While I was out seeing the sights, several of my companions started talking about their "bucket list". This concept and lingo stems from the popular movie by the same name that played in theaters a year or so back - Jack Nicholson and Morgan Freeman are a couple of old guys dying of cancer or something, Jack is rich and Morgan poor, (natch) and Jack takes them both all around the world to see and do everything they always wanted to do , before they die. Along the way, they fight, Jack learns a Big Lesson About Life, and they eventually make up. So now the word has entered the lexicon, and random everyday people talk about having their own personal bucket lists. As I was talking with my companions while we were out searching for covered bridges, someone mentioned that now that we had seen them in person, we could "scratch another item off the bucket list." So I started thinking to myself, what are the remaining items on my own personal bucket list ? Most folk would say: the pyramids, the Nile, Paris, London, Rome, the Acropolis, the Blue Grotto, Washington, New York, San Francisco, Los Angeles, the Mississippi, the Grand Canyon, etc. I am fortunate that I have traveled to these places already, and seen all these things. Places things in the world I would still like to see before I die are : Most of the national parks in the US west (Monument Valley, Glacier, Yellowstone, Zion, Bryce Canyon, etc), nearly all of Oregon and Washington St, Hawaii, a cruise of Alaska's inner passage, that train ride across the Canadian Rockies - all fairly close to home. Further away and more exotic, I'd like to get to the Great Wall of China, Japan, Thailand, Indonesia, India, Tibet, as well as Kenya, Tanzania and South Africa. In spite of all my European travels, I've never been to Ireland, Spain, or Russia, and I'd like to spend more time in Greece, Turkey, Italy and France. What items are on your bucket list ? 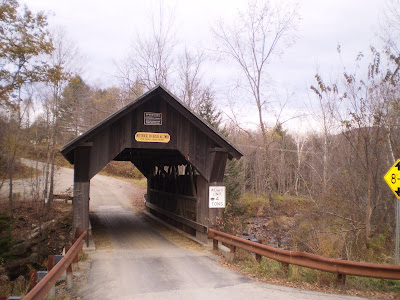 Covered bridge near Stowe, Vt
Posted by Girl From Texas No comments:

Spring and fall are great times to take a road trip in Texas, and one of my favorite destinations is Houston. I lived in this city from 1979-1991, and still consider it my "young adult home"; some days I miss it mightily. Almost any excuse will do to drive down I-45 and take in the sights. Late September, early Oct offer plenty of events : the International Quilt Show, a Rice football game or Homecoming event, and I keep memberships in several museums in Houston, which often pull in world class traveling exhibits. All the stars lined up this year and I managed to hit two birds with one stone at the same time: the Quilt Show and a touring museum exhibit of "Terra Cotta Warriors ", those statues buried in the emperor's tomb from China. I loaded up my mother, one of my sons and his friend, and off we headed.
*
We had a marvelous time, eating in all my fave local restaurants, visiting all my old hang-outs, shops, and special places. (Driving the streets around Rice, and through Rice campus, with those majestic 100+ year old live oaks, never ceases to bring me near to tears of joy. I'm a tree worshipper, must be my Celtic heritage....they are wonderful specimens.) The "Terra Cotta Warriors" exhibit was showing at the Houston Museum of Science and History - for some reason, this little museum pulls in just world class exhibits, the likes of which DFW area never gets. Last year we went to see "Lucy", the fossilized remains of an early hominid discovered by the Leakeys in Kenya, one of the "missing links". The Houston museum was the only place, outside of Kenya, that the exhibit went. How does this little museum do it ? Perhaps it is subsidized by all those rich and powerful oil companies that call Houston home....there certainly are many large exhibits inside the museum, paying homage to the oil industry, and all the science/ecology/geology that spins off of it. "Terra Cotta Warriors" was well done and very interesting - definitely worth the trip. China remains on my personal "bucket list", but just in case I never make it there, it's good to have seen some of the art it is famous for. 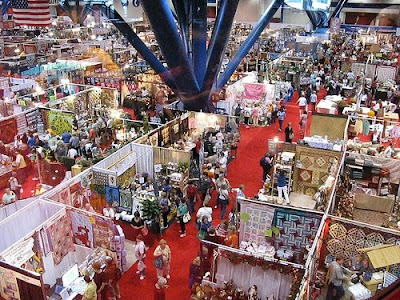 Next up on our agenda this trip was the Houston International Quilt Show. I have no idea why this quilt show, which is one of the largest in the USA, is held in Houston each year . I tend to think, perhaps stereotypically, of quilts and quilters as being from the mid-west, not "Space City". Perhaps it is just a central location (relative to east and west coast quilters) with reliably mild weather, but whatever the reason, in Houston it is held, year after year. Not really a sew-er myself, it used to be I just visited this event for the incredible shopping - a convention center hall the size of three football fields, filled with clothing, baskets, jewelry, arts and crafts, antiques, imports, as well as sewing and quilting supplies, fabric, patterns, equipment and tools. Over time, I enjoyed more and more seeing the incredible beauty of the quilts that are entered into various competitions. It is even more fun now that I have friends and know people who have entries in the contests. 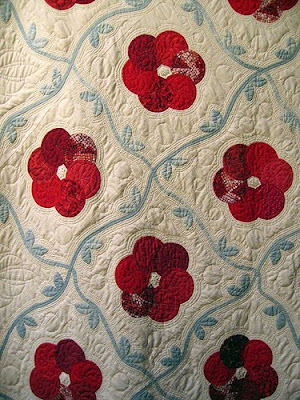 The quilts exhibited at this event range the gamut from traditional, to modern, but one thing is certain : these aren't just blankets, this is art ! 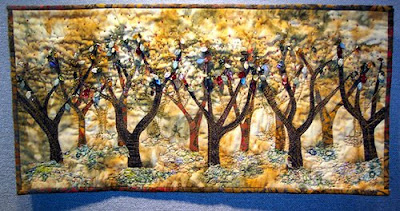