More Reasons Why I Love Autumn

Autumn is my absolute favorite time of year. Interestingly, I asked my students the other day which was their favorite season, and most of them said either winter or fall. I think I know why : Growing up in Texas, autumn is when we finally get a break from the misery that is summer. The weather starts to cool down, become less humid, and pass for what most folks in Vermont would call "summer". (Hubster, a die hard Yankee who just happens to live in Texas, prefers summer, no matter how hot and sticky. Too many memories of having to dig his car out of 4 feet of snow, I suppose.) I love fall not just for the blue skies , crisp air, golden leaves, "Friday Night Lights" football mania and kitschy pumpkin themed decor. I actually enjoy celebrating, shopping for, decorating, cooking, planning and thinking about Halloween and Thanksgiving. I love all the seasonal events that happen around Texas in the fall. And, of course, it's the season of my birthday.
*
Why do people care about their birthdays, long after they have passed the age to have parties or receive gifts ? It seems childish, yet even if the day passes uneventfully, it 's a happy milestone. (Consider the alternative ! ) It's a little known fact that John Lennon and I share the same birthday, which happens to be October 9, and I have had the good fortune to be in New York City, some years, on that very weekend. There is always a mournful little group in Central Park paying homage to his memory - kids too young to have ever heard the announcement that came on the radio the day the Beatles broke up, late in the afternoon when I was jumping on my friend Margie's trampoline and her mother came running out of the house, crying hysterically, "The Beatles just broke up ! " - just across from the Dakota in a garden area of the park that is consecrated as "Strawberry Fields". It is sad to be there on that day, but also touching. I have shared the moment but not the sadness. Some of my happiest birthday memories are of walking through Central or Riverside Park with one of my oldest and dearest friends, just kicking the leaves and thinking wondrous thoughts.
*
The weeks before and after this date are so full of my favorite seasonal things to do, the actual date never seems melancholy to me . Rather, it makes me feel as if I have a month long celebration, one full of all my favorite things to do, set out just for me.

The month long celebration of my birthday season kicks off with the State Fair of Texas. It is such a corny old fashioned thing to do, yet I have been attending since I was a babe in arms. All my life I have been riding the midway rides, patting llamas , sheep and cows at the petting zoo, looking at new cars, and most of all , eating corny dogs. Even when I went away for college, I came home each year for a weekend and dragged whichever boy I was dating at the moment along with me.
*
One year, while still in high school, I was actively involved in a club called Junior Achievement, or JA. (I joined, mostly, to flirt with boys - it must be confessed.) For some reason, as a fund raiser or a community service project - I forget why, exactly- our local chapter of JA signed up to help work the Heinz pickle booth in the Foods building at the fair. This meant we had to work in shifts, after school and on weekends, and stand around greeting people while convincing them to take a small green plastic Heinz pickle pin - a little pickle, about 1/2 an inch long that you could pin on your lapel, like politicians do nowadays with the American flag . This job sounds like fun but after you'd handed about about 10,000 pickles with a cheery "Hello, welcome to the Heinz pickle booth. Please take a pickle ! " most of us wanted to scream. This job gave us free passes into the fair, however, so that year I went nearly every single day. I actually worked the day of my birthday, which was a school day, and the boy I had an insane crush on at the time bought me a Belgian waffle ( crispy waffle with real strawberries, whipped cream, and powdered sugar - yum ! ) which we shared as the fireworks were going off across the lake......it was just too romantic. I remember him wiping the extra powdered sugar off my nose...... 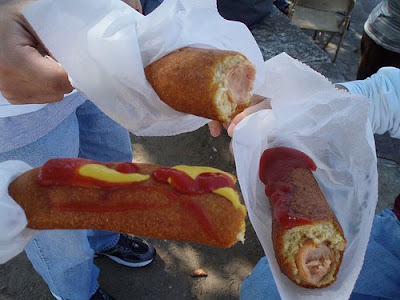 .......But by far, the best thing to eat at the State Fair of Texas (and every year, they have something new and weird to eat, like fried Twinkies) are, hands down, the corny dogs. Properly known as Fletcher's corny dogs, although all the kiosks at the fair which sell them , and there are hundreds, claim to be Fletcher's, the original corny dog. (Kind of like Ray's Pizza, and the Original Ray's Pizza, etc, in Manhattan.) People come from far and wide just to eat these corny dogs, and I have to say, no grade school cafeteria corny dog can compare. It's hard to explain why they are so tasty, but they are made from scratch ( not pre-battered) and deep fried ( not baked ). Sinfully delicious. GFT believes in the magical power of Fletcher's Corny Dogs so much, she fed them to each of her sons at a tender age, trying to imprint the power of Texas upon them, all the livelong day. It is now a family tradition to run as fast as possible upon arriving at the fair, to eat a corny dog before doing anything else. Like all die-hard fair goers, I confess I have my favorite spot to purchase them ( near the front gates to the Cotton Bowl). Often hubby's fave band, the Killdaires, are playing at an open air stage in this same area, and the juxtaposition of these events, coupled with a beer, just send him into waves of ecstasy.

Last year, I knew we were passing a milestone when I took my sons to the fair, along with Son No. One's girlfriend at the time, the Beauty Pageant Queen. They spent a lot of time riding various rides and making out, while younger son and I kept trying for a prize at the shooting gallery. After a long , fun day, we wound up eating dinner at our favorite Mexican food dive in old east Dallas. It was just about a perfect day.

Remembrances of Hurricanes Past 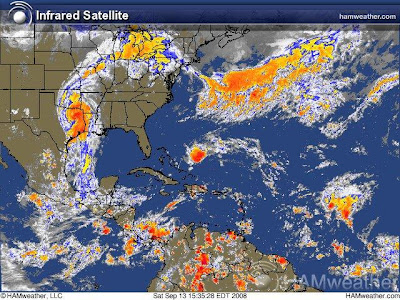