Escapism of the Purest Kind 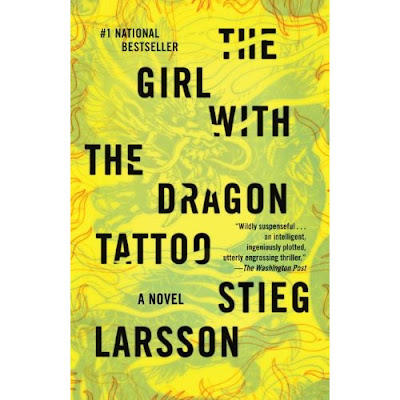 Steig Larsson's trilogy of mystery novels The Girl with the Dragon Tattoo, The Girl who Played with Fire, and The Girl Who Kicked the Hornet's Nest have generated such media buzz in recent months that I barely dare to mention them here, fearing redundancy. What is there left to say ? I enjoyed reading them immensely - sure. Read each tome, weighing in at 500-600 pgs, in under 13 hours - could not put it down - certainly. Many reviewers have speculated on a variety of reasons why these novels have captured our attention to the degree that they have : great characters, action packed, edge-of-your-seat suspense, etc. Along with these lists come ample explorations of the books' many faults: often too wordy; choppy sentences, plotting, and structure; long boring technical passages; too much "preachy-ness" on popular left-wing issues such as woman's rights, government corruption, and human trafficking; often walloping cliff-hangers or minor threads that were never resolved. Yet the first volume has been on the NYT best seller list for 48 weeks now and shows no signs of slowing down, with a movie recently released (which was a pretty good adaptation, I thought) and more films, of the sequels, in the works.
*
I have a few of my own thoughts on why these books are so popular :
*
1)For this, the last generation that still reads books ( more on that topic, later), readers want books that suck you in. Books that create a total world, with infinite details, gripping plot, characters you love and identify with and wish you were. Enough substance to get lost in. For previous generations, these books were Gone With the Wind or Lord of the Rings - whether you love hanging out at sci fi and fantasy conventions and arguing in Elvish while getting your Hobbit feet signed by the guy who played SamWise GamChee or staying up all night debating if Scarlet ever will get Rhett back while putting up your GWTW collectibles Christmas Tree, the end result is the same. These characters are people so interesting and fully rounded that one can extrapolate what they would do in the future; they live on outside the text. A friend of mine, who was tired of hearing co-workers argue incessantly about the destinies of characters on a beloved tv show, once said, "Who are these people ? You talk like you know them !" And so it is with Lisbeth Salander and Mikael Blomkvist. Lisbeth is the talented, spunky, determined and rebellious woman each girl knows dwells inside her. Mikael is the smart, feminist yet strong intelligent man we wish we could date, or know ourselves to be. It would be interesting to see how readers break down on gender and political lines, that is, how many women vs men, Republicans vs Democrats are reading these books....but I digress. The world of these books is one we enjoy so much, we over look the books' faults to spend time with them. Sure, there are plenty of good guys, bad guys, morals triumph - yet all if it is fresh. Cliches are avoided, new situations and characters are compelling.

2) Remember, in America we are reading these stories in translation by Reg Keeland (they were originally written in Swedish!), yet they still hold up as compelling narratives. Sure the prose isn't perfect, and a certain degree of literary-ness has been lost. But even through the translation, certain aspects of the culture, the "voice" of the various characters, the humor and feelings of the author comes through. This is thanks due to a great translator; I've read a fair amount of Russian, French, and German lit in translation and I've gotta say (as much as I love certain books), sometimes they're a bit dry. I'm trying to think of a single book or author that has rocked the English speaking book world in the past 50 years (roughly, my life span) to the degree that these books have. A brief conversation with the hubster has posited Solzhenitsyn or Gunter Grass as possible comparisons, and while these authors achieved amazing critical acclaim and both scholarly and literary kudos, they failed to excite as much mass culture popularity. Which has me wondering : how many other great reads are out there, that we never got to read, b/c they aren't in English ?

3)I just finished teaching a unit of mystery fiction to my students, so elements of the genre are fresh on my mind. These books are great examples of how strict and complex (like a sonnet!) the rules of mystery fiction can be, and the challenge to the better writers is to play with and individuate the form (like Shakespeare!), while creating memorable reads, plausible scenarios, puzzles the reader can't figure out till the end, and compelling characters we 'd rather spend an evening with than real people in our lives. Locked box puzzles, red herrings, clues, suspects, sidekicks who control the reader's point of view and the dissemination of information....This is the contest, and Larsson rules. The greatest tragedy here is that after presenting these three manuscripts to his publisher, the man just up and died. The audacity ! Now we'll never get to continue the journey with our two new best friends...Lisbeth and Mikael.
Posted by Girl From Texas 1 comment:

The Cheapest and Best Therapy Money Can Buy 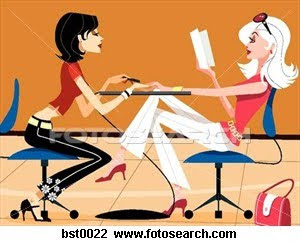 In Texas, it's warm 10 months out of the year; people wear sandals for nearly as long. It's no surprise that there's a nail salon on every street corner and prices are competitive. Once when I was touring the ruins of Pompeii, the tour guide said that ancient Pompeiians loved to eat out and did so frequently. Someone in our tour group asked, "How this could be determined? " The answer had to do with simple mathematical facts: there were more restaurants uncovered in the ruins of the city than there were citizens who lived there. What other conclusion can be drawn ? And so it is with the plethora of nail salons, in every price range and category, that dot my fair city and those all around.
*
People of my mother's generation deemed manicures or pedicures to be a special luxury item, the kind of thing one did for a very special occasion (weddings, prom). Perhaps due to the influx of inexpensive laborers, this once or twice in a lifetime pampering has now become a weekly event for many people I know. Prices are hideously cheap, to the point that I feel guilty sometimes - and always tip extravagantly as a result. Inside my local salons, clientele range from frazzled housewives to college girls to working women to teeny boppers. One can chose to have a quiet, soothing experience (New Age music, light massage, dim lighting, glass of wine) or be sociable and visit with friends while being attended to. There are so many choices in terms of which nail salon to go to, one can choose based on mood, price, proximity, cleanliness, decor, quality, or any number of variables. I used to go to a place at the mall - can't beat that convenience - but it started looking a tad ratty, and a year ago gave me a planter's wart. Scratch that one off the list. Now I favor one or two different spots, and use varies depending on where I am, how crowded they are, etc. Mani-pedi's take about an hour per procedure, (sometimes I do both, sometimes, one, sometimes the other, depending on season, time available, budget, etc) but the relaxation these procedures provide, after a rough day of handling kids - students or my own flesh and blood - is worth more than gold to me.
Posted by Girl From Texas No comments: 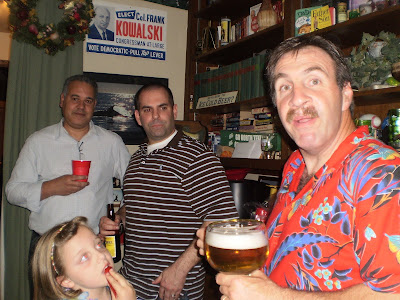 Hubster's 50th birthday bash was a a"family friendly" event, continuing the recent trend of many boomers to incorporate their children into everything they do. That, and no one can find good baby-sitters these days. Keep it clean, guys ! Little ears are listening ! 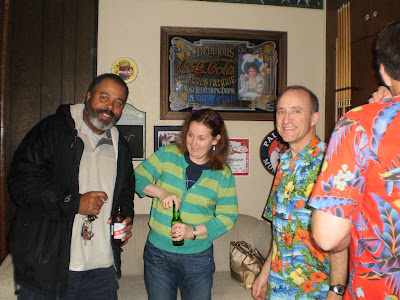 In the game room, the party was quite a lively affair, while in other parts of the house, it as a bit more staid, with varied conversations. Something for everyone..... 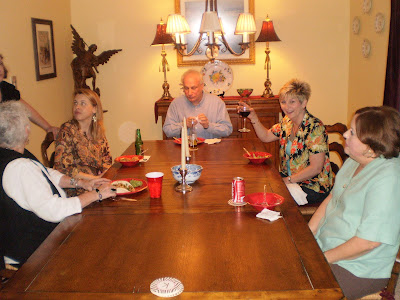 As the evening wore on, the hilarity increased.....is there anything as funny as watching a bunch of old guys who still think they are young ? 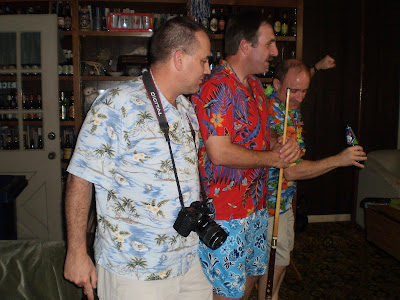 This photo sums up nicely the family dynamic that is hubster's...here , his parents, who invited themselves, reveal typical responses to the often over parodied, "what do you bring to the party?" Hubster's dad spent the evening flirting and chatting and mixing with folk; hubster's mom took it upon herself to run a load of laundry in the middle of events. (It must be noted that the washer and dryer are unfortunately located in the middle of a narrow passageway that connects all these rooms.) 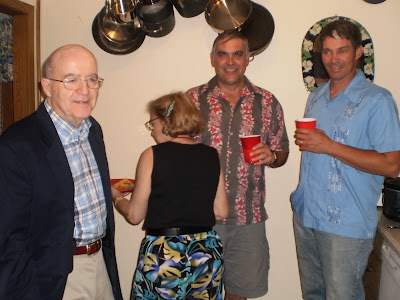